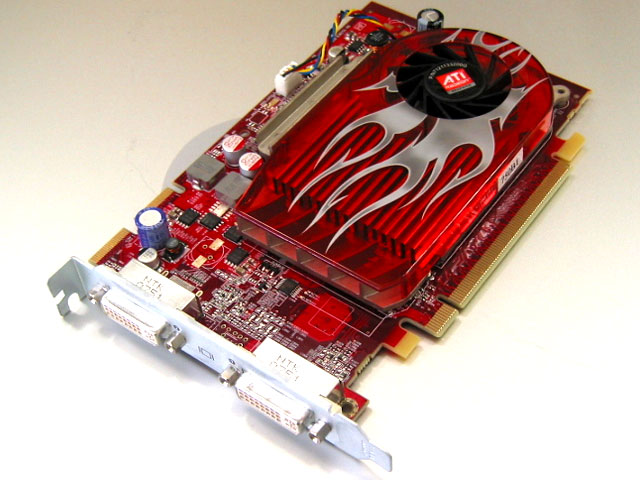 This page had reader feedback on Apple's Oct. 16th. 2007 release of ATI Radeon X1900 XT Firmware Update. (The original doc had some 'GT' vs 'XT' in some places originally - but corrected as of Oct. 17th.) See below for change info and system requirements.
(FYI: Download Page link here later updated, as the original URL from 2007 resuled in a redirect at apple and 'not a secure connection'.) 'About ATI Radeon X1900 XT Firmware Update..

As usual no real details on any changes/fixes. Reports note the updated version is 113-A52027-202 and also updates the EFI Driver to 01.00.202. (I'm wondering if it fixes an old issue with no video at Windows install/boot reported in the past from X1900 XT owners on the Boot Camp feedback/tips page here - previous workaround was to use a VGA (Analog) display for initial setup.) For those that were curious especially with the 'GT' in the doc, a reader said he checked and saw no GPU/VRAM clock speed changes after the update.

Feedback on X1900 XT Firmware Update: (later reports first)
If you apply this update let me know (news at xlr8yourmac.com) of any pros/cons you see. (Please include system/display info details also. Thanks.)

(added 6/30/2017 - over 9.5 years from original firmware release date)
'X1900 Firmware Update report (sent 06/29/2017)
I attempted to install this update downloaded from apple website but i get message window saying
'Necessary resources are missing, corrupt, or do not have the correct permissions. Delete the ATI Radeon X1900 XT Graphics Card Update and re-download it and run it again. item:6' error message.
can you help update my firmware here is my video card info from system information in utilities folder

It's been almost 10 years since anyone reported on this here (and I never had a X1900 card to udpate personally) but some ideas/questions:

If none of the above is the problem, can you use another computer (different location/router, etc) to download the update?
(I had to change the original URL to the firmware update download page, but you may have used the same one.)
Another problem that's been seen with very old Apple updaters is expired Security Certificates, but that error message is usually that the update can't be verified. (In Feb 2016 a reader sent a Tip for OS X Installer Can't be Verified (due to expired Apple certificate) - setting the system date/time back to an earlier date before the certificate expired.)

(added 10/17/2007- updated 10/18)
' I installed this hoping it would solve the random pixel artifact issues I've been having. It didn't help. Here is a photo of what I am talking about: http://www.dganimation.com/CIMG3574.jpg. Here's more info on what I am referring to:
http://echeng.com/journal/2006/12/09/ati-radeon-x1900-xt-macpro-artifacts/
It's the weirdest thing. It only started happening a couple months ago. I suspect Apple needs better drivers for this card. It's not heat related either. I can erase the artifacts with a white window OR setting my screens to a lower resolution. (lower res reduces load on the card, but artifacts have been mentioned by others also.) Annoying! Now I'm just hoping that once I get Leopard and do a complete system enema, the problem will go away.. People in other forums tell me I need call Apple and beg for a replacement X1900 card. My warranty expires in less than 15 days..
Jason K.
Digital Graphics & Animation Studio
http://www.dganimation.com'

(10/18/2007)
'I applied the update to my 8 core, I had to download it as my Mac did not detect it in software update, even after I said 'Check for updates now' (That is nothing new for me, my 8-core won't install the most recent Intel tower firmware update at all, says I don't need it even though I have the very original version.) Once I downloaded the 1900 firmware, it went smooth and installed quickly.

I had no issue before the update and have no issue after the update. I do however think that my thumbs render much quicker in Aperture and they scroll much quicker also. I have 1780,000 images in it (referenced) and it is much faster scrolling the thumbs now for some reason.
-Art '

(added 10/17/2007 - updated 10/18)
' FYI- I am using the X1900XT card in my Mac Pro, but I bought the PC version of the card and flashed the firmware to run on the Mac Pro. Software Update did not (and probably will not) notify me there is a firmware update available for my version of the card. It shows up in my System Profile as an ATI X1900XT however.

(You might want to leave well enough alone anyway if you're not seeing any issues - but the page I linked to has a download link for it also. But not sure if it has any sort of card ID/revision, etc check. Sometimes with firmware updates it's better to leave well enough alone if you're not having any issues as is, especially when the update has zero info on what it changes/fixes. (Not sure what firmware version is in your card but Apple system profiler will show the version and EFI driver version.) The updated version is -202. BTW - a flashed PC model user above said he applied it without any issues.)
I totally agree. If it aint broke, don't fix it. I am curious to know if it's the same with any other readers with a PC X1900XT. I will check my firmware version later tonight. thanks for the response!
(he later wrote)
my X1900 XT firmware: Revision ID: 0x0000 ROM Revision: 113-A52027-140 EFI Driver Version: 01.00.140
seems to be the same as the apple branded product, (someone had to use an extracted Mac X1900 XT ROM to flash the PC model card) but Software Update still doesn't know it's there. I'm not having any issues and no one has really reported any benefits so I'll leave it as is. Maybe there will be some benefit or bug when Leopard is released..
-Darryl '

(added 10/16/2007- updated 10/17)
'So I had the same results as the others who installed this update. The Rom was updated to the .202 variant, and the EFI Driver (as reported in Apple System Profiler) was updated to 01.00.202 from 01.00.140. This is probably the reason for the absence of garbled Vista booting. (An earlier report below from a 30in Cinema/WinXP (Bootcamp) user noted the update may have fixed his garbled screen issue and included a link to an apple forum thread on the subject, although a 23in Cinema HD user said he's never seen that issue.) Now it's what I imagine all PC users see, instead of a blocky, pink mess I get the black screen with the green loading bar, sweet..
I checked in Vista for any changes to the clocks and they were the same as before. I will report back in a few days after I have time to see if the shimmering effect has gone away or not, since its so sporadic.
(he later wrote)
I have a Viewsonic vx2245wm 22'. I previously used this same display with my old Quicksilver Powermac and had no such issues with it. The problem generally doesn't appear, but when it rears its head it is definitely an annoyance. There is no real repeatable thing that makes it crop up, as far as I can tell its random, and is definitely not heat related since games do not seem to be causing any artifacting or such. There are certain images that really exacerbate the problem when its acting up, and I have found that dark greys and near blacks are the tonal ranges that show this. I tried to take a photo of the problem and a screenshot as well to make sure it wasn't a buffer issue and neither evidenced the problem. The camera simply for the fact that it is pretty terrible and the pixels on the screen were too small for it to really show.

I have considered talking to apple about it but am loathe to give up my machine for any period of time since its my main work machine. Anyway, I have read reports online about people getting replacement cards that did not fix the issue.

For the record I bought my machine August '07. The display is running at 1680x1050 (native rez) through the DVI port. I haven't tried switching to the other DVI port or using the VGA cable, mostly because I can't be bothered to try since the problem is so minor and sporadic. I also used the DVI connection with my Quicksilver, for the record. (Did the QS show the same issue? If so it's not related to the X1900 graphics card specifically. Restarting the computer sometimes solves the problem but cycling the monitor on and off doesn't ever solve the problem.

Not sure if you're ever heard of this problem, but I figured I would explain it some in case this crops up with other readers. Great site and thanks for maintaining such a great resource.
(and another email on 10/17)
Sure enough the Shimmery/sparklies are still here. I threw a website up real quick with some pics/videos of them, though they are somewhat hard to make out. Hopefully if one of your readers has found a solution to this problem they can share it with me. Artifact Page http://homepage.mac.com/waitec/artifacts/. You are welcome to post this up. Thanks, CP '

(added 10/17/2007)
' Yesterday i installed the new (X1900 XT) firmware update from Apple and after a restart the fans are very loud.. never change a running system. So be careful with updating the new 1900XT Firmware. What about your experiences? (see reports here)
-Kornelia '

I asked if he'd rebooted the system again.

(10/16/2007)
'Follow up to my email in March.. just ran the X1900XT updater in the hope it would fix the horrid dithering I see on my Samsung SyncMaster 226bw.. no luck, still looks awful compared to when I boot into Windows XP.
Cheers, Chris '

(10/16/2007)
' I have installed the X1900 Firmware Update. The process was very quick and problem free. I have not noticed any changes or improvements in my limited use of the card with the new firmware (played Command & Conquer 3 for about an hour).
I have not had a problem with a scrambled display in bootcamp. I'm using an Apple Cinema HD 23' display though, so perhaps it's related to his display.
Thanks, Andy '

(10/16/2007)
' This update seems to fix my problems with boot camp video corruption. Until now, booting into boot camp (XP) required 6-10 reboots to get a boot without a scrambled screen.
I'm running XP with a 30 inch Apple cinema display. I'm hopeful that this fixed the problem, but I will have to wait and see if the good reboots continue. There is a thread where we discuss it at: http://discussions.apple.com/message.jspa?messageID=5578500#5578500
(Note: The above forum thread URL from 2007 no longer works.)
-Bill S.'

I wondered if it fixes an old issue with no video at Windows install/boot reported in the past from X1900 XT owners (Boot Camp feedback/tips page here had older reports on this - workaround was to use a VGA (Analog display for initial setup.)
Kevan G. (of fix my mac in Scotland) sent screenshots from ASP on his card's before/after firmware versions - Before: 113-A52027-140, After: ...- 202 and the EFI Driver went from 01.00.140 to 01.00.202. (There may have been several different card firmware versions shipped in the past.) Kevan mentioned he's never had any overheating problems but he frequently cleans the X1900's heatsink/fins, although some claimed that was not the cause of their problems. Not everyone has had a problem, but here's a previous page with some ATI X1900 XT Artifacts/Overheating Notes/Tips.

This article applies only to video cards that originally shipped with a specified Mac Pro or were offered as an upgrade kit by Apple. Similar cards that were not provided by Apple may have compatibility issues and you should work with the vendor of that card to confirm compatibility.

* To identify a graphics card part number, check the label on the back of the card.